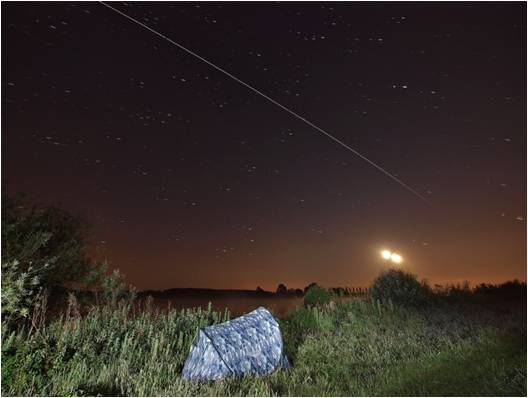 What is it? – The International Space Station or ISS is a large spacecraft which orbits around Earth. This orbit allows the ISS to be reached by launch vehicles (such as the Space Shuttle) of all the international partners for the delivery of crews and supplies. It is the largest and most complex international scientific project in history. The ISS is the size of a football pitch fitted with almost an acre of solar panels that provide electrical power to six state-of-the-art laboratories.

Can the ISS be seen from Earth? – Yes, it travels at an amazing 17,000 mph and orbits earth at an altitude of approximately 250 miles. The sheer size of the structure and array of solar panels reflect sunlight, making it the biggest, brightest object orbiting earth. Only the sun and moon are brighter. It can easily be seen moving across the night sky, at certain times, almost resembling a slow moving fireball.

How do you capture it on camera? – With a bit of planning and the right equipment it can easily be captured on camera:-

Planning – Firstly, one needs to calculate at what time the ISS will pass over the skies above. This can easily be found by visiting a website: www.heavens-above.com which will identify the exact days and times at when the ISS will pass directly above one’s location, and which part of the sky to look. There are also a number of excellent mobile applications such as ‘GoSatWatch’ and ‘Flyby’ which allow this to be done remotely. 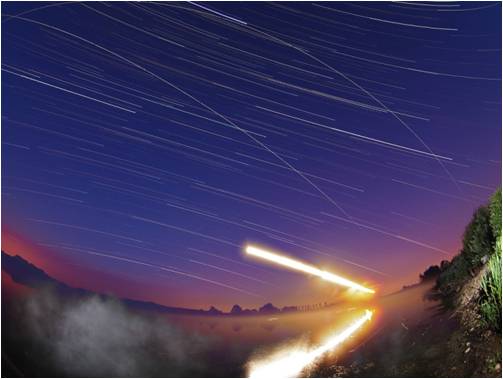 Execution – A good ISS capture will require a long exposure. A tripod is therefore required to keep the camera nice and steady. A wide angle lens will ensure maximising as much of the ISS flyby which can travel across the entire horizon. Personally, I use the Olympus 7-14mm or 8mm fisheye which are ideal lenses. Try to locate a foreground object of interest within the frame, a line of trees or buildings in order to give the image perspective and scale. Set the camera to manual and use long exposure times of anything between 15 and 30 seconds. With camera primed and in position all that is left now is to wait for the ISS to enter the field of view. By capturing a single or number of continuous exposures the resulting image(s) will reveal a long trail across the frame. Capturing numerous and continuous images will allow you to stack and produce a composite, which can produce stunning results.

ISS Double flyby photo (bottom) – For this ISS double flyby image I chose a location that offered a good foreground subject (water) and scope to cover the entire east/west horizon. Planning involved choosing an evening where the ISS would fly over my location numerous times (in one night) and a look at the weather forecast to ensure clear skies. Armed with a one man tent and all my camera gear I headed off and arrived on site late evening on June 11th. The first ISS pass was due at 2300hrs and subsequent passes every 90 mins. The plan was twofold 1) Set up one camera waterside and take continuous 15sec exposures for the entire night 2) Use a second camera for each ISS pass in different locations at the site. In between passes I would grab a short power nap huddled in the tent. Not a very comfortable evening but the resulting images made up for it. Using stacking software I produced two composite images, one detailing the ISS passes alone and the other including a star trail from the entire evening.

The star trails and bright light (moon) is the resulting visible effect of earth’s rotation. The location choice was also perfect as the morning mist makes for an eerie scene, perfectly complementing the ISS pass. The images made the national press the following day, which was very pleasing. One final word about capturing the ISS – it is due to be decommissioned (crashed into the sea) in 2020, so be quick! 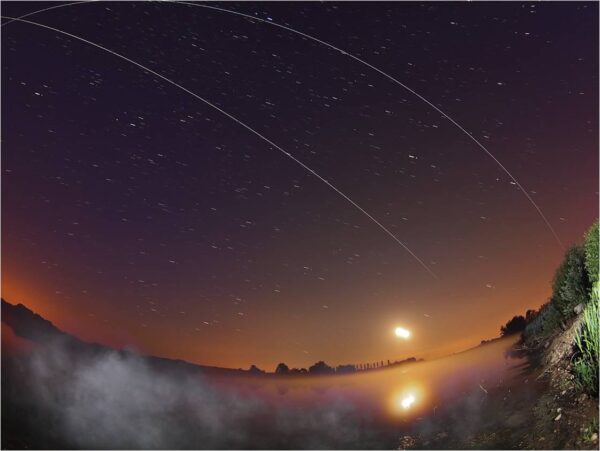 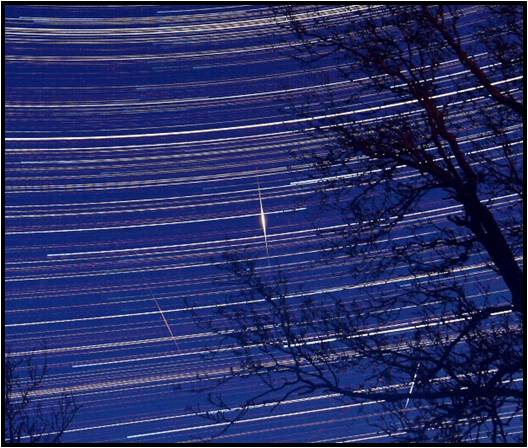 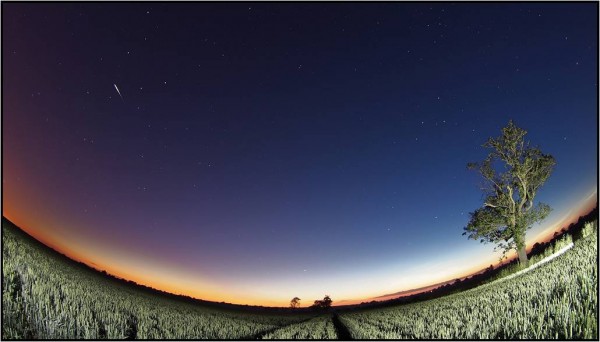