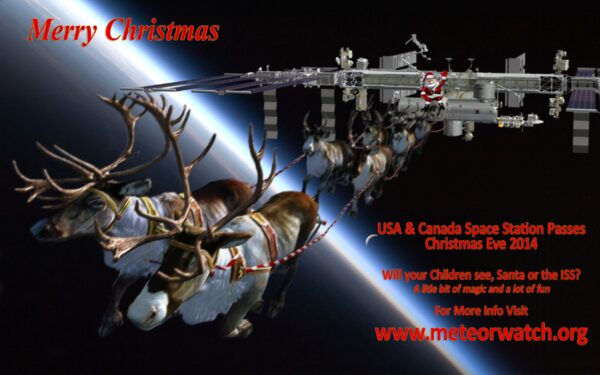 It’s Christmas Eve. presents are under the tree and it’s time to make merry with a little festive fun!

The international Space Station (ISS) will be passing over North America, it will appear as a bright star like object moving across the early evening sky.

A cheeky parent would grab their children, run outside and say “Look up kids, it’s Santa’s Sleigh! He’s on his way to start his deliveries…” MINDS BLOWN!

Look down at the little faces of wonder as your children’s imaginations run wild with thoughts of Santa laden with presents and his reindeer speeding across the sky (apart from the ones who know it’s the ISS, maybe they will enjoy this bit of fun too?). This is what being a small child is all about at Christmas magic, imagination and wonder.

It’s up to you how you play it, this is very personal to you and your family. Some parents will continue the ruse and some will tell their children it’s the Space Station, hopefully they will be mesmerized either way. You never know it may even inspire the next Albert Einstein or Neil Armstrong. Many great scientists and scientific discoveries were born out of imagination, lets nurture our imaginations this Christmas.

There will be timely alerts for each pass by @VirtualAstro on twitter so follow along and make sure you don’t miss the passes – There will be more passes with alerts in the future so stay posted.

Please see the following table of Christmas Eve ISS passes. Passes are listed in order of appearance and passes vary dependent on location. There is an in depth description of the ISS and the passes below the table.

Times and locations are approximate and may vary roughly around a minute of the times stated. More Southern US areas may see the ISS very low down in the Northern sky – dependent on location.

All you need to know is when and where the ISS will be passing over your location. See the table above for Christmas Eve pass times.

Make sure you give yourself plenty of time, get your cameras ready and enjoy the ISS as it passes over Christmas Eve, or id it Santa