Comet panSTARRS – A simple guide on how to see it 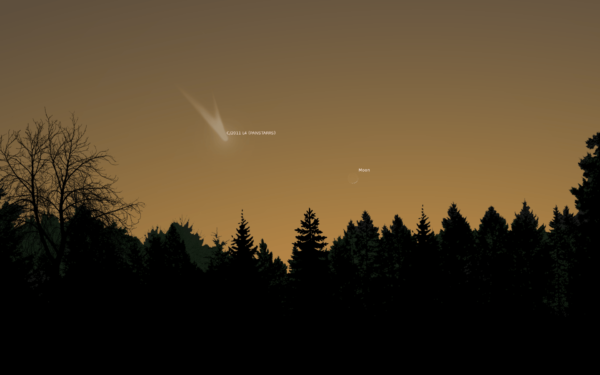 From the 7th of March 2013 and for the rest of the month, comet panSTARRS will be in the early evening skies of Northern hemisphere.

The comet has been visible to the naked eye in the Southern hemisphere and was bright enough to be seen in twilight skies from places such as New Zealand.

Hopefully Northern hemisphere countries such as the USA, Europe and Asia will get a chance to see one of this year’s bright comets.

For more information on what a comet is and how to distinguish it from a meteorite or a shooting star please read Space Rocks – Comets, Asteroids, Meteorites and More

There is plenty of information on the internet about where and how and what comet panSTARRS is etc; this guide is intended purely for those with none or little experience of the night sky to help you find the comet without the history and science bit.

Traditionally bright comets look like big fuzzy shooting stars in pictures, which can confuse people new to the night sky – A shooting star (meteor) has movement and is very fast, a comet will appear stationary when observing it. Read more about this

You will need a clear view of the Western horizon – on top of a hill is good, a clear sky and a pair of binoculars if you have them. The comet should be visible just after sunset (if it is bright) and will be very low on the horizon.

Whatever you do, do not look at the sun with your eyes, binoculars or telescope – This will damage your eyes and may permanently blind you!

At the time of writing this guide, it is unknown if the comet will be bright or have a long tail, or even be visible. The comet was very bright in the Southern hemisphere so we will assume it will be in the North.

The comet should be easy enough to spot after March 10th but you may be able to spot it sooner if it is particularly bright.

Shortly after the Sun has set look slightly to the left of it and scan that area with binoculars or just your eyes. As the sky gets darker you may see the comet. If not keep looking as it should become more visible as the sky gets darker. Be aware though, the comet will set shortly too.

The comet is expected to be at its best on the evenings of March 12th and 13th, but may be visible throughout the whole of March. It will be near the thin crescent Moon on March 12th and this should help you find it.