Coming to a Sky Near You: The Realm of Galaxies We live on a planet which orbits a star, and along with a hundred billion other stars, our Sun orbits the centre of our Milky Way galaxy. It doesn’t just stop there; our galaxy is one of hundreds of billions of galaxies in our Universe that gravitationally clump together in groups or clusters.

Throughout Spring in the northern hemisphere, astronomers and people interested in the night sky are going to be in for a galactic treat, as this is the time of year we can see the Coma/Virgo Super cluster or “Realm of Galaxies”.

Galaxies are massive islands of stars, gas and dust in the Universe; they are where stars and planets are born and eventually die. Galaxies are cosmic factories of creation — where it all happens on a very grand scale. To give you an idea of size, it would take you roughly 100,000 years to travel across the disc of the Milky Way at the speed of light! The Coma/ Virgo Super cluster dominates our intergalactic neighbourhood; it represents the physical centre of our Local Super cluster and influences all the galaxies and galaxy groups by the gravitational attraction of its enormous mass.

Unfortunately galaxies are almost impossible to see with the naked eye, so you will need powerful binoculars or a large telescope, such as a Dobsonian to see most of the brighter galaxies in this region.

The cluster contains approximately 2,000 elliptical and spiral galaxies of which approximately 20 or more are observable using amateur equipment. This includes 16 Messier objects such as the Black eye spiral Galaxy M64, and elliptical galaxies, M86 with its plume, massive M87 at its centre and beautiful spiral M88, to name just a few.

To find the approximate location of the Realm of Galaxies, first find the constellation of Leo – the lion — easily found in the South East this time of year with the backwards question mark overhis head. Go past Leo’s rear end and you will be in the bowl asterism of Virgo, to the bottom left of Leo and the faint constellation of Coma Berenices (Berenices hair) top left of Leo. This is the Realm of Galaxies! 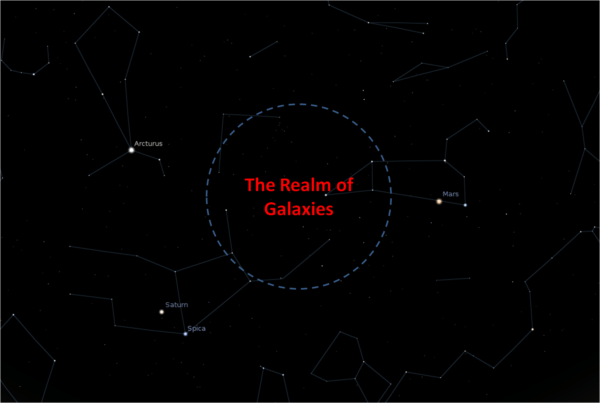 Download a map of this region or use a star atlas to find your way around this area and try and spot as many galactic delights (faint fuzzies) as you can. As a bonus, the ringed Planet Saturn is just below this area too at the moment!

Give yourself plenty of time, wrap up warm and just think, you are looking for the largest structures in the Universe, hundreds of millions of light years away from Earth.