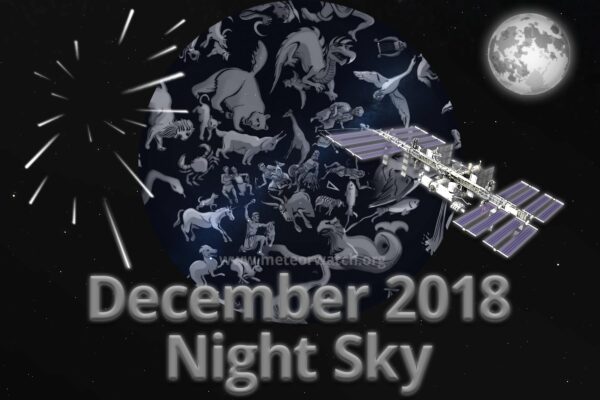 In the evenings early on in the month, you can just glimpse Ringed Planet Saturn. Saturn will be briefly visible just after sunset low in the west. It will be lost completely in the light of sunset the rest of the month.

Mars is still quite prominent in the south. However, it’s lost a lot of its brightness compared to when it was at its best in the summer. The Red Planet will start December 2018 in the constellation of Aquarius. It will slowly move eastwards into Pisces during December. The planet will continue to lose brightness throughout the month.

On December 7 Mars and Neptune will have a very close encounter. This encounter will only be visible in a telescope or high power binoculars. The two planets will both be visible in the same telescope field of view due to their apparent close proximity to each other. 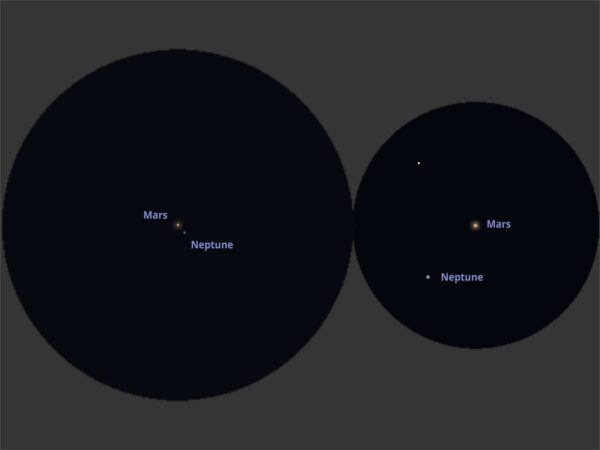 Artist impression of view in Celestron Skymaster 15 x 70 binoculars left and as seen in large amateur Telescope with 26mm eyepiece right. (Not to scale)

Venus is at its best in December 2018 before sunrise! At the beginning of the month, Venus will shine at a very impressive mag -4.9. Venus will be the brightest thing in the sky bar the Sun and the Moon. Venus will dim slightly to mag -4.7 toward the end of December- still incredibly bright. The planet is visible from approximately 4am to 8am in the UK during the month. You can find out more about Venus and what to expect to see for the next few months here.

Mercury is visible just before sunrise early in December 2018. The tiny Planet reaches greatest elongation (furthest point to the west of the sun) on December 15. Mercury and Jupiter have a close encounter later in the month – See below.

The name given to December’s Full Moon in folklore is the “Full Cold Moon”. It is also known as the Moon Before Yule if you follow Old English/ Saxon traditions. Unlike some other Moon names, the Full Cold Moon is fairly self explanatory as it occurs in the cold of December night sky. Occasionally you may also hear it referred to as the “Long Night’s Moon”. This is because this Full Moon falls in the month with the most hours of darkness. In December 2018 the Full Moon occurs a day after winter solstice – the longest night of the year.

Lunar Encounters – Events worth getting the camera out for

In the morning of December 3, the 12% illuminated Crescent moon forms a triangle with Venus and bright star Spica. 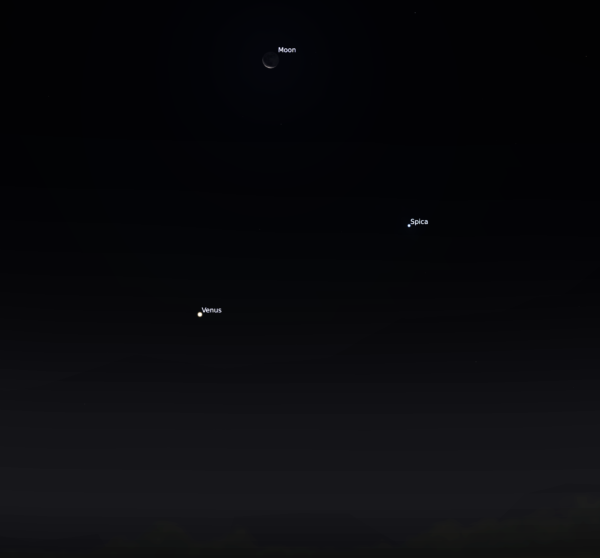 The Crescent Moon, Venus and Spica in the night sky December 3 before sunrise. Credit Stellarium

Early in the evening on December 8, the thin crescent moon comes roughly within 1° of Saturn before sunset.

December 14, close approach of the 1st quarter moon and Mars – Very close to the peak of the Geminid Meteor Shower. Look out for meteors!

The mighty winged horse denoted by the asterism of the Square of Pegasus is making its way toward the western horizon and sets around 1:00am.  The zodiacal constellations of Pisces, Aries, Taurus, Gemini and Cancer are prominent mid month. Mighty Perseus stands guard directly overhead. 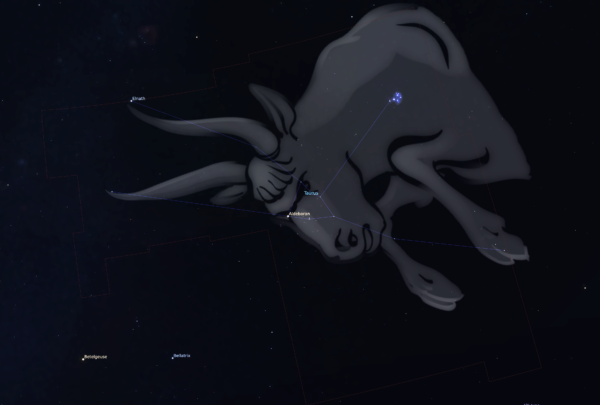 The most noteworthy and prominent constellation this month is Taurus the bull. Taurus is quite a striking constellation with its V shaped head and burning eye of the bull – The bright orange giant star Aldebaran. There are two of the best open clusters in the December night sky in Taurus. The Hyades which form the head of the bull and above all the Pleiades or Seven Sisters. You can find out more about the strikingly beautiful Pleiades here. The Pleiades are high in the sky and due south in December 2018.

The constellation of Orion the Hunter, is probably the most striking and recognisable constellation. Orion rises early in the evening and will be due south in January. Taurus stands in the way of Orion as he pursues the Pleiades through the night sky in Greek mythology. Forever chasing them but forever blocked by Taurus (Zeus) eternally in the night sky.

In December 2018 it can be seen with its handle (Imagine a sauce pan) upended mid evening. Line up the two stars at the opposite of the handle known as the pointers. Then draw an imaginary line in the sky. Continue this imaginary line to a faint boring looking star. You have found the North Star – Polaris! In contrast to what many have been told, it’s not the brightest star in the sky. That title goes to Sirius which we will discuss next month. 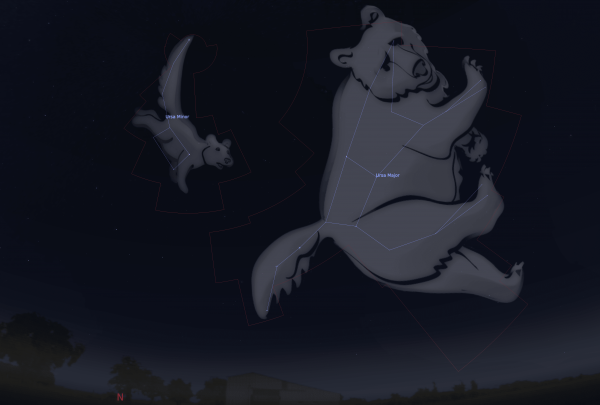 Ursa Major and Minor. Use the pointers of the big dipper – Saucepan asterism to draw an imaginary line to the North Star – Polaris in Ursa Majors tail

With its brightness expected to peak on December 16. Comet 46P/Wirtanen maybe just visible to the naked eye. The comet will build in brightness early December 2018. It will easily be spotted in binoculars or a telescope.

On December 16 Comet 46P/Wirtanen can be found near the Pleiades cluster in Taurus. Look for the comets bright nucleus and cloudy tail of dust and ice. Scan the area to find it or pinpoint it more using a star chart. 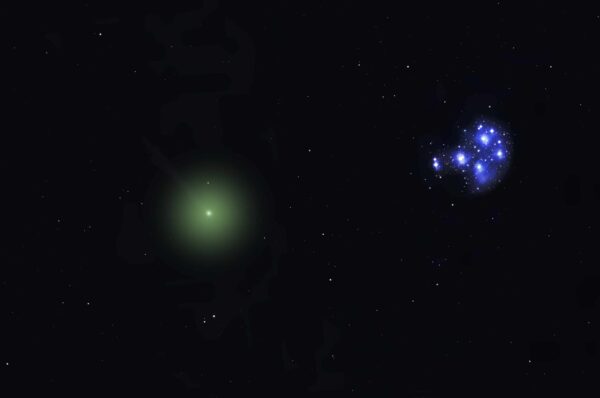 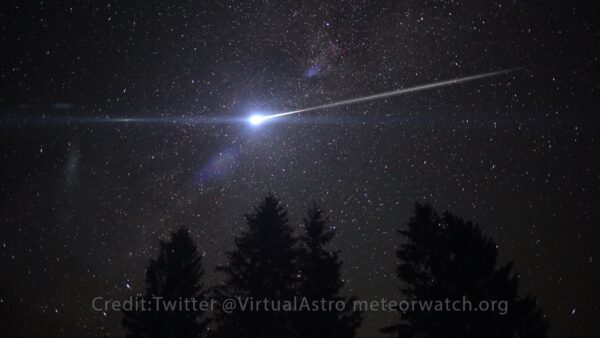 There are two meteor showers in December 2018. The Geminids and the Ursids. The Ursid Meteor Shower is a rather minor meteor shower and occurs on a Full Moon. Therefore, it won’t be a shower of note this year.

In contrast, the Geminid Meteor Shower is the most prolific and reliable meteor shower of the year. The grand finale of the annual meteor showers with up to 100 meteors per hour.

The Geminids peak on the evening of the 13/ 14 December 2018. They have a rather broad period of activity and many slow moving bright meteors can be seen a few days before their peak.

Click here for more information on this years Geminid Meteor Shower and how to watch it. 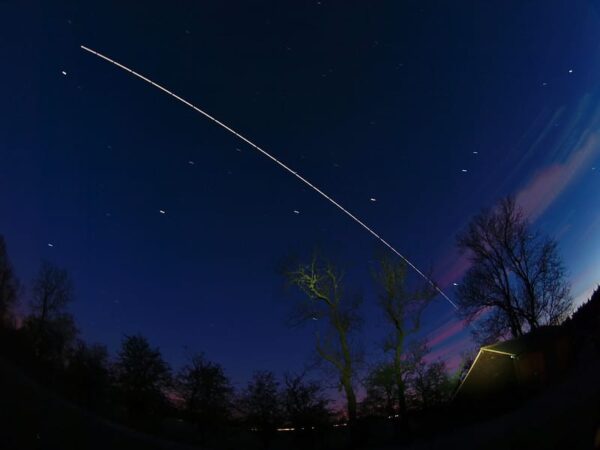 The International Space Station – ISS passes over the UK during the first half of December 2018.

The Space Station celebrates its 20th year in Space this year and has been a shining beacon of scientific endeavour, exploration and inspiration to many.

For observers elsewhere, there are a number of apps and sites that will list pass times for your location.

A new website with worldwide times and alerts is coming soon.

Summer Solstice will be exactly 6 months away where the hours of night and day are reversed.

For a more detailed description see this Wikipedia page here. 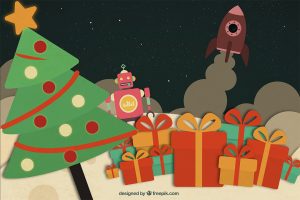 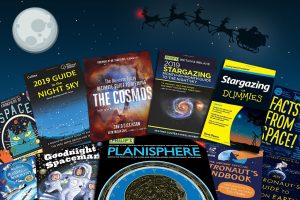 Binoculars – The Best Binoculars for Stargazing and More 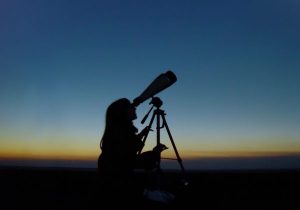