Your guide to constellations, deep-sky objects, planets and events, Tonight’s Sky, Highlights of the December Sky

Mars hovers above the southwestern horizon after nightfall. Use a telescope to get a better look.
Venus joins Mars in the southwest late in the month.
Look for it low over the horizon just after sunset.
In the late evening throughout the month, turn to the east to find magnificent Jupiter.
A telescope reveals dark bands in the planet’s cloudy atmosphere.

Two prominent constellations in the December night sky represent notable individuals of ancient Greek mythology.
The great hero Perseus holds the head of Medusa the Gorgon.
Located in Perseus is M34, an open star cluster about 1,400 light-years away from us.
Open star clusters are groups of young stars that all formed at the same time within a large cloud of dust and gas.
Look for it with the naked eye or with binoculars in a dark sky.
Queen Cassiopeia was punished for her conceit and vanity by being tied to her throne. Cassiopeia’s “M” or “W” shape makes this constellation easy to identify.
Eta Cassiopeiae is a wonderful and colorful double star. Use binoculars or a small telescope to discern its gold and blue hues.
M103 in Cassiopeia is a fine open star cluster with a prominent red star near the center. Its fan shape is evident in binoculars.
Lying between Cassiopeia and Perseus is the lovely Double Cluster. This pair of open star clusters is easy to see with binoculars.
The Double Cluster resembles a handful of diamonds scattered on black velvet, with a ruby in between.

Saturn makes its appearance in the pre-dawn sky. Look for the ringed planet in the southeast before sunrise.

The mid-December night sky hosts the lovely Geminid meteor shower. The shower peaks on the night of December 13th to 14th.
After midnight, moonlight could make fainter meteors difficult to spot. But in a dark sky, you could see as many as 60 multicolored meteors per hour. 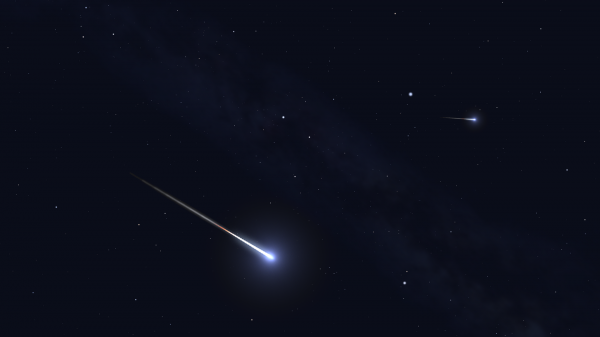