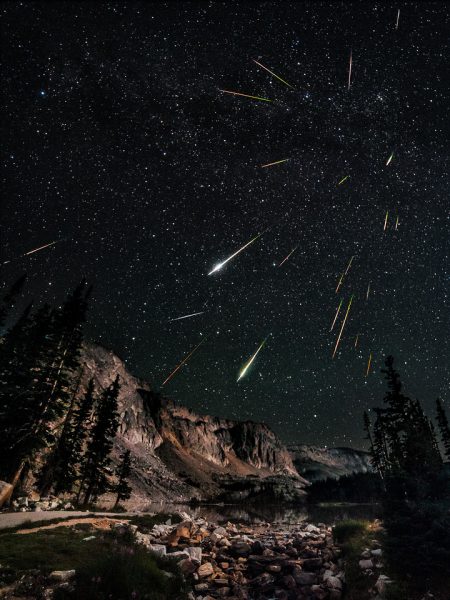 The table below shows dates, times and basic information on each of the the annual meteor showers in 2015.

A summary for each meteor shower will follow with more detail after the table.

2015 looks like it’s going to be a very good year (weather permitting) for meteor watching. The moon should not interfere with most of the major meteor showers.

Meteor Shower Dates and Times for 2015 in Detail:

Not all of the annual meteor showers are listed – only the popular ones which may be of interest to the beginner or casual observer. Most of the showers listed have good to high rates of meteors visible per hour.

A Meteor showers name relates to the constellation it originates from; The “Radiant”.  Many guides confuse and lead people to believe they need to look in the direction of a meteor showers radiant to see meteors, this is incorrect!

For more information on what to expect and a simple guide please see: How to Observe Meteors.

The Quadrantid meteor shower begins on the 1st of January and ends on the 6th, It has a narrow sharp peak of only a few hours hours before dawn on the 3rd.

In 2015 we have a Moon free sky, so most of the meteors will be visible with good viewing conditions from a dark site. Quadrantids produce up to 100 meteors per hour at peak and when at their best as they are expected to be this year, rival the Perseid Meteor Shower in August! The best time to look for Quadrantid meteors is the evening of the 2nd and 3rd of January through to dawn.

here’s no equipment or real skill needed to watch a meteor shower, you just need to be comfortable, patient and you only need your eyes. Check out the guide on how to observe meteors.

The radiant of the Quadrantids is in the constellation of Boötes. 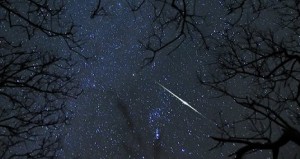 After the Quadrantids we have a break from meteor showers and then we have the Lyrids – April’s shooting stars, where I always feel the meteor watching season starts.

The Lyrids begin on the 16th April and end on the 25th producing up to 20 meteors per hour at peak on the evening of the 21st/ 22nd April.  Lyrid meteors usually lack long persistent trails but can produce very bright firebals. In the past the lyrids have been known to peak at rates of 100 meteors per hour.

In 2015 on the evening of the peak (April 21st/22nd) the waxing gibbous Moon won’t interfere with watching the shower, the best time to see the Lyrids is after midnight and before dawn.

The radiant of the Lyrids is in the constellation of Lyra. 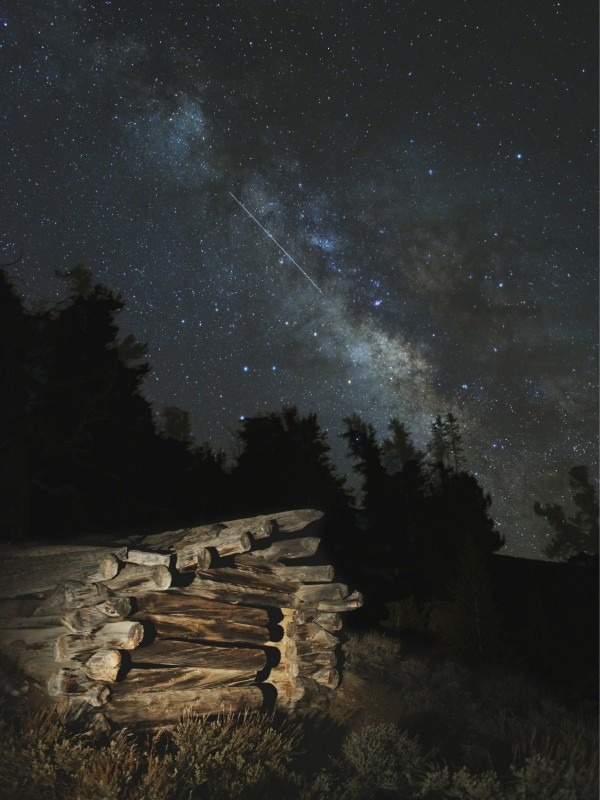 The Eta Aquarids start in April and end in May with their peak in the hours before dawn on May 5th. I have included them in this list as they may be worth while seeing for Southern Hemisphere observers, but in the North there may only be 10 to 20 meteors an hour before sunrise. This meteor shower is more for the die-hard meteor watchers and may be worth watching before sunrise on or a day or so either side of the peak.

The radiant of the Eta Aquarids is in the constellation of Aquarius. 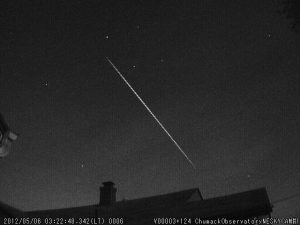 Captured by John Chumack from his backyard observatory in Dayton, Ohio USA

We may be in for a treat with this new discovery. On May 24th Earth will plough through the debris stream of comet 209P/LINEAR, a periodic comet discovered in 2004. Astronomers from NASA and Russia estimate the meteor shower (209P-ids) could produce 100 – 400 meteors per hour, but could outburst to over a 1000 meteors per hour. These figures are estimates, but expect abundant meteors and possibly a dramatic sight on May 24th, a nearly new Moon will provide good viewing conditions.

The radiant of the Meteor Storm is in the constellation of Camelopardalis.

The Perseid meteor shower starts late July and ends mid August, with its peak on and around the 12th of August. The Perseids are my favorite and the most popular meteor shower of the year.

Perseids are fast, bright and can produce bright fireballs, at their peak they can produce over 100 meteors per hour on a warm summers evening. Peak is on August 12th, but activity may be very high on the evenings of the 10th/11th, 11th/12th and 12th/13th.

In 2015 the sky will be dark with the absent Moon, so fainter meteors and fireballs will be visible.

The Perseids are probably the best meteor shower of the year for a first timer, the nights are warmer and in general people are more geared up in their gardens to enjoy an evening outside.

The Perseids are one of the meteor showers covered by the #meteorwatch twitter event, where thousands of people worldwide share their experiences and images.

The radiant of the Perseid meteor shower is in the constellation of Perseus.

The Draconids start on October 2nd and end on the 16th, they peak on October 7th.  This meteor shower is usually quite minor with roughly 20 or so meteors per hour at peak, but it has been known to flare up with hundreds of meteors per hour.

The good thing with this meteor shower is you can start looking for meteors straight after dark as the radiant point is almost overhead in the Northern hemisphere. This makes it a nice early shower to view – Will it produce hundreds of meteors this year or will there only be a few? Go outside, look up and we shall see…

The radiant of the Draconid meteor shower is in the constellation of Draco. 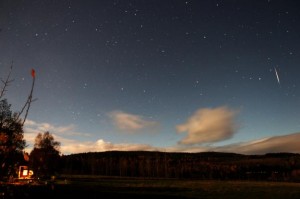 The Orionids start on October 16th and end on the 27th, the peak of the meteor shower is on the evening of the 21st/ 22nd. The Orionids are one of the lesser showers with expected rates of 10 – 20 meteors per hour.

Orionid meteors are usually very fast and bright and can produce bright fireballs, which is lucky as we need something bright to punch through the washed out sky in the hours after midnight and before dawn on the 21st. Unfortunately 2013 is a bad year for Orionids.

The radiant of the Orionid meteor shower is in the constellation of Orion. 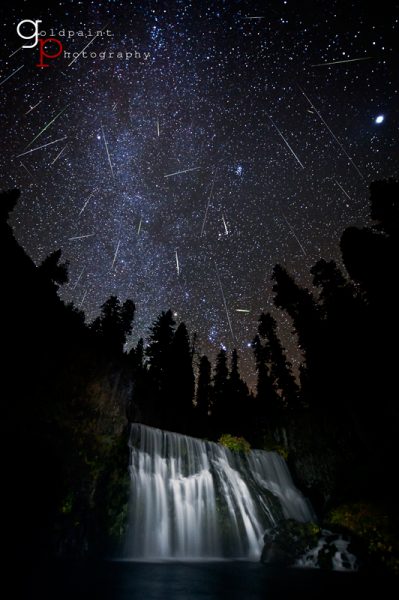 This is a very long duration shower with a low rate of about 5 meteors per hour. The peak does not increase much from this, but both Taurid showers span over a month. Taurids may well be few, but they are very bright with bright fireballs and well worth keeping an eye out for as the winter nights begin to draw in.

The radiant of the Taurid meteor showers is in the constellation of Taurus. 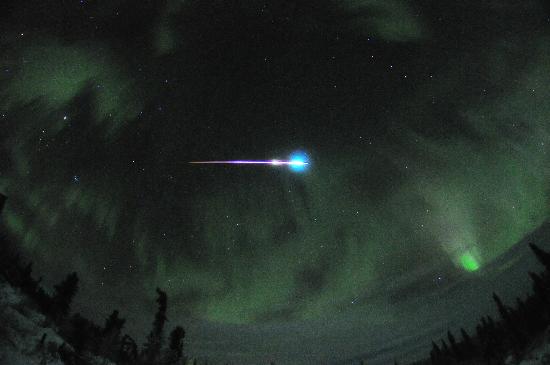 The Leonids start on November 15th and end on the 20th, peak is on the evening of the 17th/18th. The Leonids are usually a quiet shower of around 15  meteors per hour, but are famous for their outbursts especially the last major one in 1966, where many thousands of meteors fell from the sky like rain. Witnesses said they could feel the earth travelling through space and had to hold onto fixed objects as the sensation was so strong. It was similar to a car driving in a snow storm, but this was no car, it was our planet!

These meteor storms are expected roughly every 33 years (the orbital period of the showers parent comet) but not this year, we should expect the showers normal 10 to 20  meteors per hour.

The radiant of the Leonid meteor shower is in the constellation of Leo. 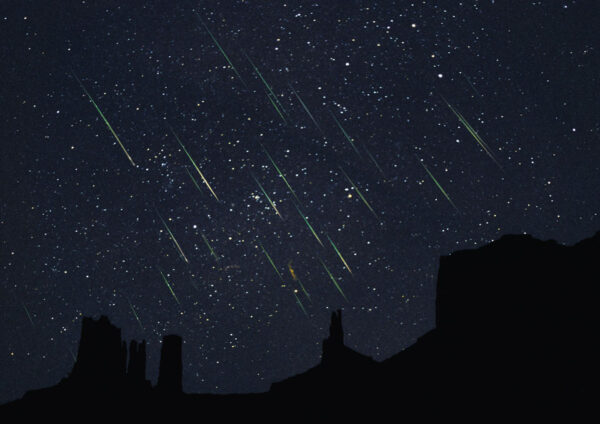 The Geminids start December 7th and end on the 16th, peak is on the evening of the 13th/14th.  The Geminid meteor shower is another favorite of mine and is considered by many astronomers to be the most reliable meteor shower of the year.

Geminids produce over 100 meteors per hour at their peak which are slow and bright. The great thing about Geminids is; if you have clear dark skies and a little patience, you will see shooting stars.

There’s a big difference between the Geminids and other meteor showers, the Geminids don’t originate from a comet – they come from an asteroid (3200 Phaethon).  Meteors from this shower are very rocky and gritty and slightly easier to see compared to the other showers.

The Geminids are another great shower for beginners or groups or as part of an event such as #meteorwatch, all you need is to dress warm, be comfortable, patient and use your eyes. See the guide on to how to observe meteors.

The radiant of the Geminid meteor shower is in the constellation of Gemini.