Meteors Streaking Across The Sky

Meteors streaking across the sky are an amazing sight.  Every time I see a meteor is a thrilling moment.

I’m not a professional astronomer or even a specialized expert.  I’ve just been watching the skies for meteors and showing others how to spot them for a long time.  I particularly enjoy helping people who have never seen a meteor before experience their first sighting.  My greatest success is watching the Perseid Meteor shower together with my kids while we were camping in the mountains together.  It is an emotional memory that we’ll share all our lives.

Watching meteors is special because it truly takes no special equipment whatsoever.  Telescopes or cameras just restrict your field of view – for best viewing simply lie back and enjoy the sky in front of your own eyes.

Meteorwatch itself is special for a lot of reasons.  It is a world-wide event of professional and amateur astronomers getting together to share the heaven’s most showy display of the year.  It’s an opportunity to collect real data that may be useful for astronomers to work with to increase our understanding of space.  For me, meteorwatch is a chance to share my excitement with others who have never seen the beauty of a meteor flashing overhead.

Our goal for meteorwatch is to increase the odds for everyone to find meteors.  Meteorwatch occurs August 12 through August 14 to correspond with the Perseid Meteor shower.  The Perseids are a predictable shower that comes every year.  In fact, meteors from the Perseids have been observed for about 2000 years already!  The meteors are frequent and fairly bright, so it’s likely that you’ll be able to spot one if you go out prepared.

The first step of being prepared is that you need to find the darkest place you can find, as far away as possible from lights that will disrupt your night vision.  If the moon is out while you’re observing, try to block it as best as you can with trees or a hill so you don’t look at it and ruin your night vision.  If your night vision does get disrupted, you will not be able to see the dimmer meteors at all, so keep your eyes up and don’t pull out your phone to tweet every few minutes. 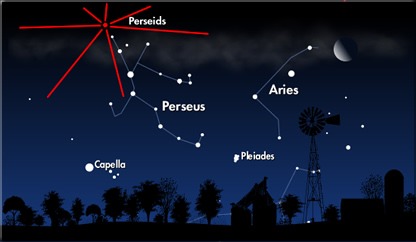 It’s true that Perseid meteors will likely come at between one and two meteors every minute, but you won’t be able to see that many because most of them are dim and washed out by city lights.  The darker it is, the more meteors you will see!  When I’m in a reasonably dark area near the outskirts of my city I’m happy to see one meteor every five minutes or so.  If you can’t get out of the city, you may have to wait longer because you will only see the brightest meteors.  There are plenty of sightings from the heart of cities, so it’s not impossible, just more difficult.  It’s certainly worth an attempt if you can find a park without lights or some other dark area near you.

The second step is to make sure that you’re comfortable while waiting.  A good chair that supports your neck while you look up is helpful.  Even though the Perseids occur during summer, the nights can get quite chilly so dress warmly and bring something warm to drink.

The third step is to keep it an enjoyable outing.  Some people like to go out alone and listen to music while waiting.  That’s great too, but I usually tell first-timers to go out in groups.  I especially encourage people to take their kids out.  Young eyes may see phantom meteors at first, but once they get the hang of it they’ll spot meteors too dim for you or I to spot any more.  Kids are fantastic at spotting meteors and it encourages them to be interested in the world around them.  Besides, who wouldn’t appreciate a late night out once in a while?

The most frequent question I get asked year after year has been, “Where should I look in the sky to see the meteors?”  In the past I’ve tried to describe how to find the constellation Perseus, but it’s rather unnecessary.  Accustom your eyes to the dark, and after you’ve seen three or four meteors you should be able to figure out where Perseus is in the sky all on your own!  It’s most important to look up, be relaxed and patient, and the meteors will dazzle in front of you as long as you are willing to watch.

Unfortunately, we don’t all get clear skies.  Some of us are clouded out and have no chance at spotting meteors above us, but that doesn’t mean you’re out of luck.  Follow the #meteorwatch hashtag on twitter for tips, pictures, radio observing and to share your experiences with other enthusiasts around the world.  Go to www.meteorwatch.org for news and information and be sure to follow twitter.com/VirtualAstro for fantastic coverage of the Perseid Meteor shower direct from his Astrobunker.

Mark Zaugg is an amateur astronomer and enthusiast who particularly enjoys introducing people to the excitement of seeing a meteor in person.  You can find him at twitter.com/Zarquil