Located in Perseus is M34, an open star cluster about 1,400 light-years away from us. Open star clusters are groups of young stars that all formed at the same time within a large cloud of dust and gas. Look for it with the naked eye or with binoculars in a dark sky.

Queen Cassiopeia was punished for her conceit and vanity by being tied to her throne. Cassiopeia’s “M” or “W” shape makes this constellation easy to identify.
Eta Cassiopeiae is a wonderful and colorful double star. Use binoculars or a small telescope to discern its gold and blue hues.

M103 in Cassiopeia is a fine open star cluster with a prominent red star near the center. Its fan shape is evident in binoculars.

Lying between Cassiopeia and Perseus is the lovely Double Cluster. This pair of open star clusters is easy to see with binoculars. The Double Cluster resembles a handful of diamonds scattered on black velvet, with a ruby in between.

Mars and Jupiter ascend into the southeastern sky well before the Sun appears. Aim a telescope at the planets to get a better look at their features.
Late in the month, dim Mercury peeks above the horizon just before dawn. If you have a telescope that’s powerful enough, you might be able to identify the small planet’s phase.

The mid-December night sky hosts the lovely Geminid meteor shower. The shower peaks on the night of December 13th to the 14th. Under a dark sky, you could see as many as 60 colorful meteors per hour. 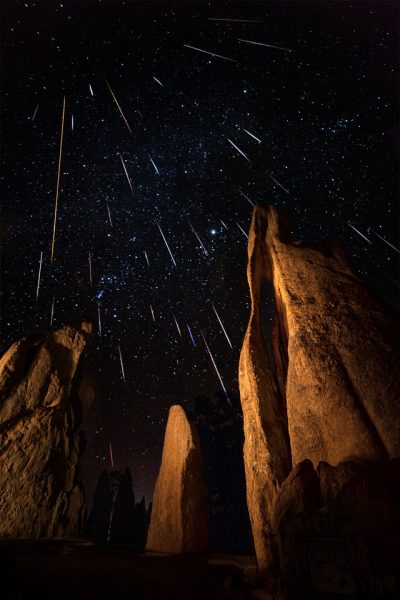