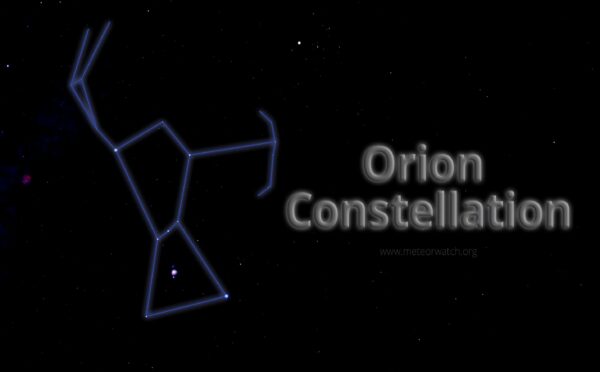 Orion: In Greek Mythology, Orion is a mighty hunter. The son of a Gorgon and Poseidon. Legend has it, Orion offended the goddess Gaia when he said he could kill all the animals on Earth. Because of this, the angry goddess tried to kill Orion with a scorpion, but Ophiuchus intervened and saved Orion. Consequently, this is why Orion and Scorpius – the scorpion, are at opposite sides of the sky with Ophiuchus midway between them.

Orion is on the celestial equator, therefore it’s pretty much visible from most of the planet. The constellation sits between and below Taurus in the West and Gemini in the east. In addition Monoceros, Canis Major, Lepus and Eridanus are on its borders. At first glance, the constellation consists of 7 bright stars forming Orion’s shoulders, waist and lower body- An hour glass asterism. Furthermore, fainter stars mark out his club above his head and outstretched arm holding a lion. In the northern hemisphere, Orion is a winter constellation. The 7 brightest stars consist of: The three central stars form the “Orions Belt” asterism and are the easiest way of identifying the constellation. Orion’s belt has featured heavily in history, from the Egyptians placing the great pyramids so they reflect the positions of the belt stars, to the films “Blade Runner” and “Men in Black”.

In addition to the brighter stars, there are also stars that make up the rest of the constellation. Three stars form a triangle consequently marking out Orions head and stretching up from Betelgeuse are five fainter stars forming the club. The shield/ lion is comprised of 6 stars to the west of Bellatrix.

The Orionid Meteor Shower is the only meteor shower associated with the constellation. It peaks around the 20th of October every year with around 10 to 20 meteors per hour at its peak. The meteor showers origins are due to Halley’s Comet. In addition to the asterisms and bright stars, Orion is a fantastic constellation for spotting deep sky objects. It is host to the most noteworthy, prominent and famous of them all: The Great Orion Nebula – M42. Easily identified with the naked eye, as a result it’s true splendour comes to life in binoculars and telescopes. A stellar nursery of gas, dust, and infant stars (as a result of being illuminated by the Trapezium) is found below the belt stars in what appears to be Orion’s sword. Furthermore, if you have a large telescope a wealth of different objects can be found consequently, there are too many to include here. Therefore here are the more famous: Beneath the star Alnitak is “The Horsehead nebula” A massive cloud of dust in the shape of a horses head blocking light from the nebulae behind. To the left of Alnitak can be found the “Flame Nebula” NGC 2024 Lying to the north-east opposite the belt and a similar distance as the belt is long, is the much fainter M78. Similar in composition and distance to M42 but much fainter. If you have a very large telescope and take long exposure images you can pick out Barnard’s Loop, weaving its way around the constellation. In conclusion, there is much more to explore with binoculars or a telescope in this favourite of many constellations. Explore it and see what you can see…