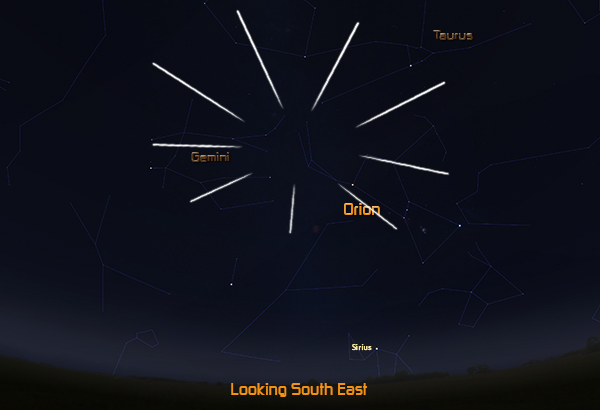 The Orionid Meteor Shower occurs annually from early October through to early November. Peak activity being on the evening of 21/ 22 October.

Unlike the Perseids in August and Geminids in December, the Orionids are a minor shower with around 10 to 20 meteors per hour.

What causes the Orionid Meteor Shower

The Orionids, as with all the other annual meteor showers are caused by a comet. While the only exception to this being the Geminids in December. Its origins in contrast coming from an asteroid.

Famous Halley’s Comet spawned the Orionids due to the dust and debris spewed from its tail as it became closer to the sun – the cloud of dust and debris which creates the meteor shower. The comet replenishes the stream as it passes through this part of the solar system every 76 years. It’s next visit to the inner solar system and our night skies will be in 2061.

As the earth passes through this cloud of dust and debris also known as a meteoroid stream, The tiny particles impact the earth’s atmosphere the causing bright streaks of light as they burn up – Meteors!

How to watch the Meteor Shower

You don’t need any special equipment or a telescope to watch a meteor shower, you only need your eyes.

Meteors appear randomly in any part of the sky and in any direction. There is no need to look at the meteor showers radiant – the point where the meteors radiate or originate in the sky. This is a common mistake that other sources and guides dwell on.  This can often confuse people into thinking they need to look in a particular part or direction of the sky.

My advice is get comfortable, look at a the sky for long as possible and you will see a meteor. For More information check out this handy guide on Observing Meteors.

For an even more detailed description of this and other meteor showers visit the International Meteor Organisation.