Perihelion 2011, The Earths Closest Approach To The Sun This Year

At 1900 GMT on 3 January 2011 the Earth will be at perihelion, its closest approach to the Sun this year.

If that sounds confusing to you, and has you wondering why it’s so cold given that the Earth is at its closest to the Sun, then this belies (a) a northern-hemisphere-centric attitude (in the Southern Hemisphere it’s summer right now), and (b) a misunderstanding of what causes the seasons.

The Earth orbits the sun in a nearly circular orbit called an ellipse. The degree by which an orbit differs from a perfect circle is called the eccentricity, e. If e = 0 then the orbit is circular; if e = 1 then the orbit is parabolic, and therefore not gravitationally bound to the Sun. The Earth’s orbital eccentricity is 0.0167, meaning that it is very nearly circular, with the short axis of the ellipse being around 96% the length of the long axis.

Thus, during perihelion Earth is 0.983AU from the Sun, while during aphelion (its furthest distance from the Sun, occurring this year on 4 July) Earth is 1.017AU from the Sun. (1AU = 1 astronomical unit = the average distance between the Earth and the Sun = 150 million km). The seasons on Earth have really nothing to do with how close the Earth is to the Sun at different times of year. Indeed how could they, given that the difference in distance between closest and furthest approach is only a few per cent?

The seasonal differences we experience are of course caused by the tilt of the Earth’s axis, which is inclined by 23.5 degrees from the vertical. This tilt means that, as Earth orbits the Sun, for six months of the year one hemisphere tips towards the Sun, so that it experiences longer days than nights, becoming most pronounced at midsummer, at which point the Sun reaches its highest in the sky at noon. Simultaneously the other hemisphere tips away from the Sun, and experiences shorter days than nights, becoming most pronounced at midwinter, on which day the Sun is at its lowest noontime altitude. 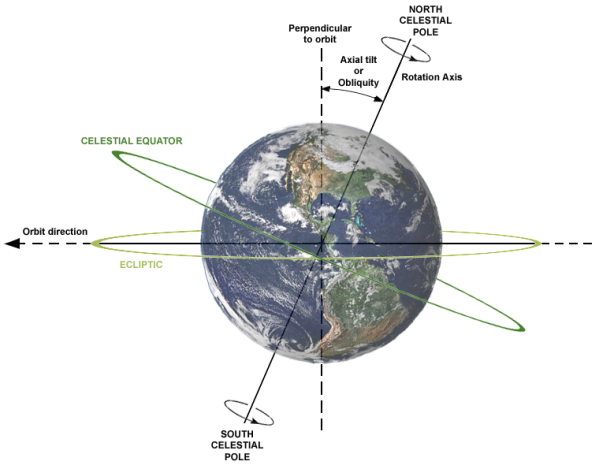 The further you are from the equator the more pronounced the seasonal effects. In fact equatorial countries don’t experience seasonal variations, while the poles experience extremes with six-month-long winters and summers.

The timing of perihelion and aphelion relative to our seasons is entirely random. The fact the southern hemisphere midsummer (21 Dec) almost coincides with perihelion (3 Jan) is simply that; a coincidence. Given that fact, there is no reason to be surprised that perihelion occurs so close to northern hemisphere midwinter. it has to happen some time and it’s coincidence that it happens to occur within two weeks of midwinter / midsummer.

To take this explanation even further, we can calculate how much variation in incident sunlight (called the flux) there would be in two scenarios:

1. an imaginary scenario where the seasonal varioations in temperature are due to the tilt of the Earth’s axis but where the Earth goes round the Sun in a perfectly circular orbit

2. an imaginary scenario where the Earth’s axis isn’t tilted, but where it’s orbit is elliptical in the same degree as ours actually is.

1. The Sun appears at its highest point in our sky each day at noon. The highest it ever gets is at noon on midsummer. The lowest noontime altitude occurs at noon on midwinter.

The amount of energy from the Sun radiant on a fixed area is proportional to the sine of the altitude, so the ratio of the solar energy radiant on a square metre of Glasgow between midsummer and midwinter is

So here in Scotland we get 84% more energy from the Sun in summer than we do in winter, due to the tilt of the Earth’s axis.

2. If the Earth’s axis was not tilted, then we would only experience temperature differences from the Sun depending on how far or near we are from it. In this case, the amount of energy from the Sun radian of a fixed area is proportional to the square of the distance from the Sun, so the ration of the solar energy radiant on a square metre of Glasgow between perihelion and aphelion is

So we get 7% more energy from the Sun at perihelion than we do at aphelion., due to the differing distances to the Sun.

From this you can see that, while the distance to the Sun has some effect on how much heat we receive, it is a very small effect compared to that produced by our axial tilt.