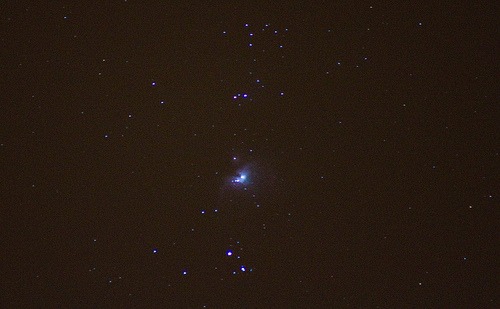 The weather over the past few days has been amazing. Lovely crisp blue skies, amazing sunsets & wonderfully clear night skies. And I’ve been using this to my advantage, taking as many photos of the stars as I can.
I had the idea to photograph the Orion Nebula (see above) for a few nights but I was waiting for the sky to become fully clear. I first photographed the nebula when the sky was hazy & the full moon was casting its glow across most of the sky. The photograph I got on that night was amazing (to me, it was amazing, obviously it’s not amazing to those with epic telescopes & satellites deep in space ;p) & it surprised me because I never expected to be able to capture a photograph like this. I thought it was reserved for people with powerful telescopes!

I made a pact with myself that I would go out there again when the moon wasn’t due to rise until 3am & when there was less haze around.

That night happened a few days later. It was -2 & there was frost on the ground so I wrapped up extra warm & took the camera out to cool (tell me if I’m wrong but letting the sensor cool on your camera helps reduce noise…I think). After a little while I started to photograph the nebula using various different settings. Now, you all know that the earth spins, this is what gives us night & day. Therefore, if you set your camera up to expose for 30 seconds, you’re going to get light trails instead of a still (for want of a better word) image. As my camera ISO goes up to 12000, I stepped it right up & I exposed for 3.2 seconds. For me, this is the best way to be able to capture a still shot without using a tracking device. I did, however, find that ISO 12000 was too noisy so I stepped it down to 5000. And that seemed to do the trick. I imported the shot into Lightroom, tweaked around with some settings & this is what I came out with.

I’m pretty happy with it. Next step is to get a new mirror for the telescope (we accidentally knocked it over & the mirror smashed inside) & an adapter for my DSLR. Then we’ll be away! Hope you enjoyed this post, thanks for reading. If you have any questions you can either leave them in the comments box or you can join me on twitter (tweeting as @_purpleface) or facebook (facebook.com/purplefacephotography).