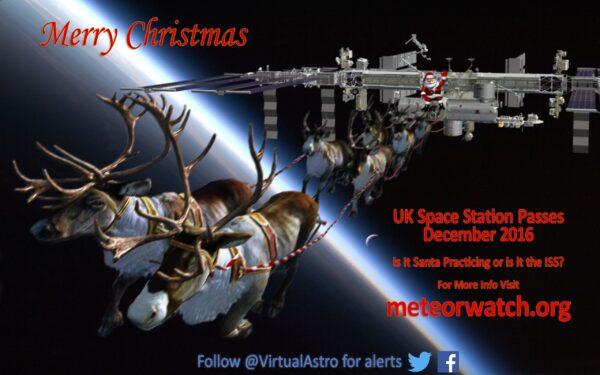 Space Station (ISS) is back over UK evening skies during December 2016. There are some great passes leading up to the Christmas period.

The ISS is the largest Space Station/ laboratory ever built. Orbiting Earth at 17500mph at an altitude of roughly 200 miles. Consequently, spotting the station is very easy and you don’t need any special equipment. You only need your eyes!

Fancy some festive fun? You could tell your Children it’s Santa on a practice run. Or whatever you think will fire their imaginations. A little bit of magic goes a long way with young children, maybe inspiring them in the future. You never know, Santa (The ISS passing over) could encourage a future Einstein, but most of all it’s fun.

How to Watch The Space Station

All you need to know is when and where the ISS will be passing over your location. The United Kingdom (British Isles) is small enough for most of us who live there to see the ISS at the same time. Neighbouring countries can see the station pass over at roughly the same time also.

The table below gives approximate ISS pass times and basic information, helping you spot the station as it passes over.

Only bright passes seen from the UK (and parts of Western Europe) are listed and the information is approximate. Therefore timings may differ by a few seconds, dependent on observer’s location. Times may change at short notice if the Station performs an orbital boost and changes its orbit. All Timings are local UK time.

Make sure you give yourself plenty of time, get your cameras ready and enjoy the ISS as it passes over in December. Keep your eyes peeled for meteors, satellites and other objects too, they will be visible most nights!