The Draconids are coming! Will this meteor shower produce a storm of observable meteors, or just a minor squall? The Draconid Meteor Show should begin on October 8, 2011 starting at dusk (roughly 19:00 BST) and continue through the evening. Peak activity of this normally minor and quiet shower is estimated to be at 21:00 BST (20:00 UT). There seems to be a wide range of predictions for this year’s shower, but some astronomers believe there could be up to 1,000 meteors per hour, making this a meteor storm!
END_OF_DOCUMENT_TOKEN_TO_BE_REPLACED

On Saturday 8 October 2011 a rare event may occur – a meteor storm! The usually sedate Draconids meteor shower only produces a few shooting stars per hour in most years, but in some years we have a meteor storm, and that’s just what’s predicted for this year. 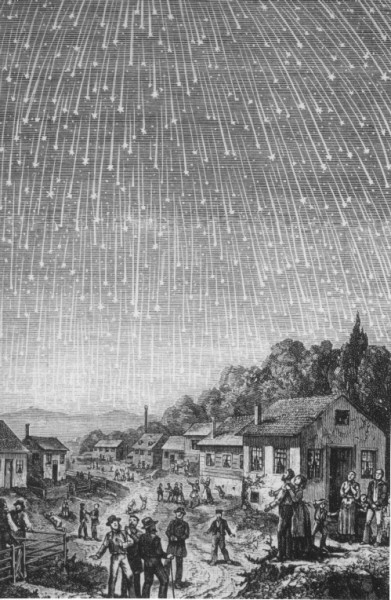 During a meteor storm the Earth passes through a particularly dense clump of comet dust, meaning that rates of shooting stars temporarily spike, and estimates this time suggest the possibility of up to 10 shooting stars per minute during the peak of the storm. However a nearly full Moon may spoil the view, possibly drowning out all but the brightest meteors, reducing the actual observed rate perhaps 1 per minute – still well worth looking out for.

If you’re keen to witness this (possibly) amazing event here are some top tips:

Make sure you tell your friends! This a great opportunity to see a very rare meteor storm, so get as many people as possible outside and looking up.

CAVEAT: This is only a predicted meteor storm; it may not occur and if it doesn’t meteor levels will be very low.