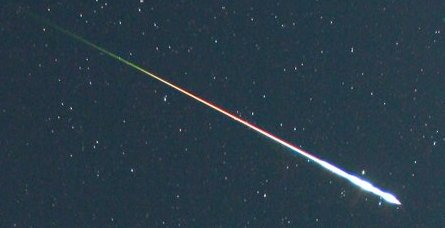 A classic summer astronomical standby may be in trouble this year, but that shouldn’t stop you from looking. That’s right, we’re talking about the Perseids, that “old faithful” of meteor showers which sees northern hemisphere residents getting bundled up to camp out under the summer stars every mid-August.

Some of our earliest astronomical memories come from watching this very shower under the dark northern Maine skies of our 1970’s childhood… yes, the Perseids are public crowd-pleaser and even an occasional Yahoo-trending fave that can even knock the likes of Brittany & friends down to the number 2 slot for a 12 hour period… so, what’s this news of the Perseids being “troubled?” They haven’t been threatened by irate pop stars, have they?

Unfortunately, this year’s menace is a more inviolate force; the Full Moon. Yes, this year’s Perseid meteor shower peaks the morning of August 13th, mere hours before the Moon reaches Full status on the same day at 14:57EDT/18:57UTC. Instead of the usual respectable zenithal hourly rate (ZHR) of around 100 meteors per hour, observers can only expect to see a paltry few of the very brightest fireballs…

But all is not lost. With a little planning, a few factors can work in YOUR favor this year. Keep in mind that the Perseids have a very broad peak, and the radiant near the head of the constellation Perseus lies above the horizon all night for observers north of 32° latitude. Plus, this month’s Full Moon (known as a Sturgeon Moon) has a southerly declination of about -11° degrees; your best bet for catching Perseids this year may lie with watching several mornings prior, in the window of time between the setting of the waxing gibbous Moon and the beginning of local twilight… and yes, you CAN still watch a meteor shower during a Full Moon and see an occasional Perseid.

Generally speaking, the farther north in latitude you are located, the more likely you’ll be able to take advantage of these twin factors. Finding as dark a site as possible and putting something physically between yourself and the bright Moon is the key. A building or a hill makes an excellent “Moon-block.” Perseids are swift movers with an atmospheric entry velocity of about 61 km/sec.

The meteors are tiny grain-like debris shed by the comet Swift-Tuttle, and the shower occurs as the Earth intersects the path of the comet every mid-August. The Perseids are also famously known as the “Tears of Saint Lawrence” who was martyred on August 10th, and are probably the most well known of all meteor showers because of their annual dependability and their timely occurrence with the northern hemisphere summer vacation and holiday season.

Historic ZHR rates have always hovered around 60, but the past several years have seen an enhanced ZHR of +100. This shower is also infamous for sparking “Meteor Shower of the Millennium!” headlines annually, Although I have yet to see the same occur this year… a shower that MAY be a contender for said headline is the Giacobinids (or do you say Draconid?) meteors in early October 2011, an obscure shower that may dazzle this year… more on this to come in October. 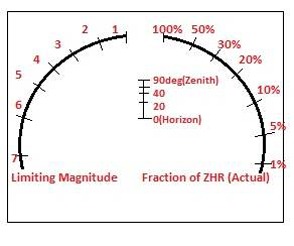 Wonder what that the above graphic has to do with anything astronomical? You are looking at what is known as a nomogram, a graphical device that is a neat way to show interrelationships between factors. (Hey, how do you spend your weekend?) The graphic above was adapted from a nomogram featured in the November 2002 issue of Sky & Telescope; it shows the interrelationship between the two biggest factors that affect the zenithal hourly rate; namely, the radiant’s elevation above the horizon, and the limiting magnitude of your sky. (For a way “math-y-ier” dissertation on nomograms and the ZHR, click here).

This device will be your indispensible friend and secret weapon as you plot your meteor observing adventures for this or any shower. The ZHR is a theoretical limit; it assumes that you have absolutely perfect skies with a radiant directly overhead and an unwavering 360°degree view. Unrealistic, right? Well, it’s something to strive for. As you can see after playing around with the graphic a bit, the biggest killer of how many meteors you’ll see is how dark a sky you are under.

Even when the Perseid radiant is half way (45° degrees) in altitude towards the zenith, a limiting magnitude of +4 (as is typical around a Full Moon) means you’ll see roughly 10% of the zenithal hourly rate, i.e. 6-10 meteors per hour instead of 60-100. Yes, light pollution, both natural and manmade, is a real meteor shower buzz-kill. And keep in mind, other factors can conspire to lower that rate even further, such as obstructions on the horizon and the fact that a sole observer can only cover a limited swath of the sky visually. Still, the sight of a well placed fireball can be unforgettable and just plain pure magic to witness.

Do get out there on days leading up to this week’s Perseid meteors, and be sure to follow and report the magic via #meteorwatch on Twitter; they’re worth setting an early alarm for!