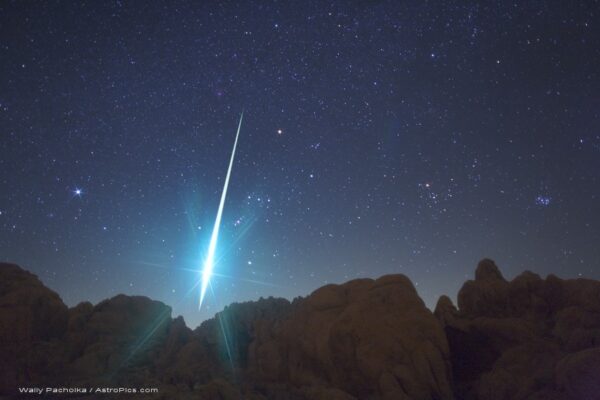 Problems will arise, however, from an 82% illuminated waning gibbous Moon in the adjacent constellation of Cancer. Rising roughly around 10PM local on the night of the peak, this makes for the worst possible Moon phase as it’ll be high and bright in the early AM hours, just as the meteor shower is getting into high gear. But as always, I wouldn’t let that stop you from looking!

To use a rough sports analogy, you’ll see exactly zero meteors if you do not try. This shower is also unique in that its source isn’t a comet, but an asteroid named 3200 Phaethon. The first asteroid discovered by a spacecraft, namely the Infrared Astronomical Satellite in 1983, there’s a fair amount of conjecture as to exactly what 3200 Phaethon is; is it a true Palladian-type asteroid or an inactive comet nucleus?

An Apollo asteroid, 3200 Phaethon has the closest perihelion of an asteroid to the Sun known, at 0.14 astronomical units (A.U.s), less than half the distance of Mercury at perihelion. Again, very comet-like behavior. And yet, 3200 Phaethon has never shown signs of a tail, coma, or any other cometary features. And I know what’s coming next; no, 3200 Phaethon is not scheduled to impact the Earth any time in the near future, but will make a passage of 0.0198 A.U.s (about 7 times the Earth-Moon distance) on December 14th, 2093… we may be in for a “Geminid storm” on that far off date.

The Geminids have been increasing in frequency during the recent years, as has another fairly obscure shower known as the Ursids that is active between the December solstice and Christmas. The radiant point lies at about 30° degrees north near the bright stars of Castor and Pollux in the constellation Gemini, thus rising around 10 PM local time for mid-northern latitudes slightly before that troublesome Moon. 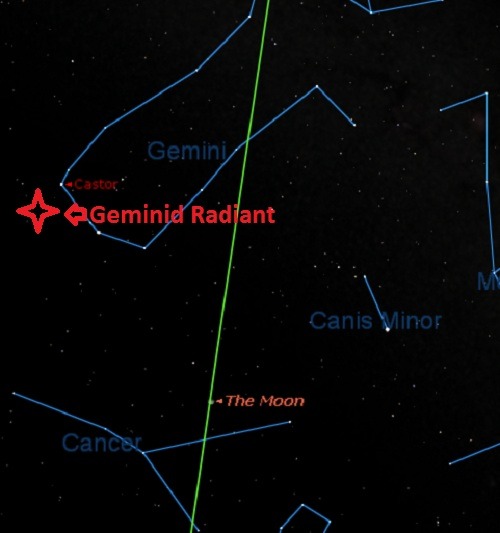 Extra credit factoid: Did it seem like the Moon meddled with the Perseids, Leonids, and the Geminids this year? It’s not your imagination; the interval between the Perseids, (Aug 12th), and the Leonids (Nov 17th) is 96 days, and the span from the Leonids to the Geminids is 27 days… sound familiar? That’s because the synodic month, or span of time from similar phase to phase, (i.e., Full Moon to Full Moon, etc) is about 29.5 days. This assures that all three showers will have very nearly phase situation… at least this also assures better circumstances for next month’s Quadrantids!

Looking for something more? Meteor shower photography is a simple affair; just tripod mount a DSLR and set it for a manual time exposure with the widest possible field of view. Naturally, this is a hit-or-miss affair as meteors like to appear at random intervals. Plus, the bright Moon will call for relatively short exposures of the Geminids this year of about less than a minute.

Review photos carefully on a large screen after a session; the camera will often catch meteors that the human eye misses. Aim about 45-90 degrees away from the radiant to catch long, streaming meteor trains. Finally, assure those batteries are fully charged, as cold December nights and long exposures can conspire to drain energy. I keep a spare set inside my jacket pocket, where they can stay warm until needed.

Also keep a close eye on the International Meteor Observers (IMO) site, as they’ll be publishing quick look data on meteor activity worldwide in the days leading up to the shower, and tweet and share those Geminids via #meteorwatch!

Do get out these chilly December mornings and witness one of the best meteor showers of the year. Of course, it’s always possible, albeit highly improbable, that an unscheduled killer asteroid or a fleet of Van Neumann machines might make their appearance… hey, now THAT would be a fine end for 2011! 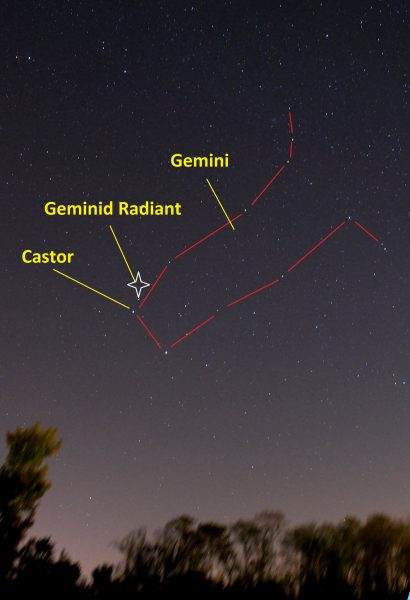