This is one of the most prolific meteor showers and is associated with the comet Swift-Tuttle.  During the peak of the perseids, the radiant (the place the meteors appear to come from) often seems to be the ‘sword handle’ within the constellation of Perseus. 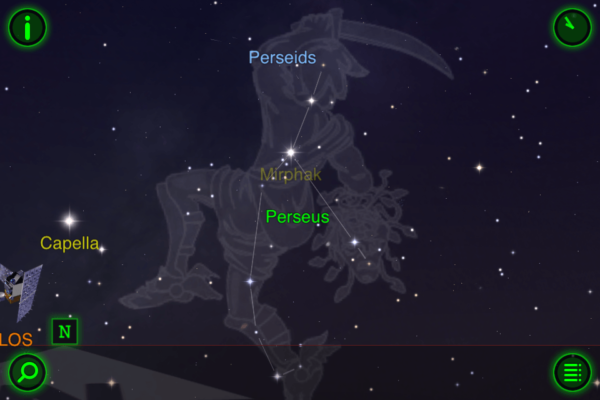 (the above image was taken using the iPhone app Star Walk)

The Perseid meteor shower peaks on 12/13 August every year and can have anything from 80 to 140 meteors an hour.  Observers have been known to describe Perseid meteors as being fast and bright in appearance.  Often a large number of them leave a trail behind them as they enter the Earths atmosphere and in the past many of them have turned into fireballs.

It wasn’t until 1866 that the association with Comet 109P/Swift-Tuttle was proved by Giovanni Schiaparelli.  The Perseid meteor shower itself has been known and observed for a long time.  The first known recorded accounts were by the Chinese in AD36.  Both the Japanese and Koreans also have documentation of observing the Perseids from the 8th century onwards.  Western observations seem to start during the 19th century, or at least the ones that were documented.

Now with advances in technology we can watch the meteor shower (Moon dependent of course this year) from the comfort and warmth of our own living rooms.  We can track who has seen meteor showers by using a twitter map and discuss in real time if any of our online friends spot a fireball.  Modern technology gives us new ways to interact with other astronomers, and not just locally, it allows us to encourage others to get out in the back garden and just look up.